While it’s true that Sunday dinners in my home growing up always consisted of a pasta dish of some sort, it didn’t stop there. Grandma always featured a second course. My favorite, beyond far, was a beef roast. There was definitely something hearty and satisfying about the aroma of caramelizing beef wafting through the house that kept us all in great anticipation of the two o’clock meal that awaited us. I’m still there.

Beef and the roasting pan are great buddies, in my opinion. There’s a culinary magic that occurs as the beef is cooking up. It harkens to an inner, probably genetic, desire for red meat that’s brown and crisp on the outside and tender and sweet on the inside. It’s very often a celebratory kind of meal. Or it can be just a down home comfort food for chilly nights. Nothing like it. 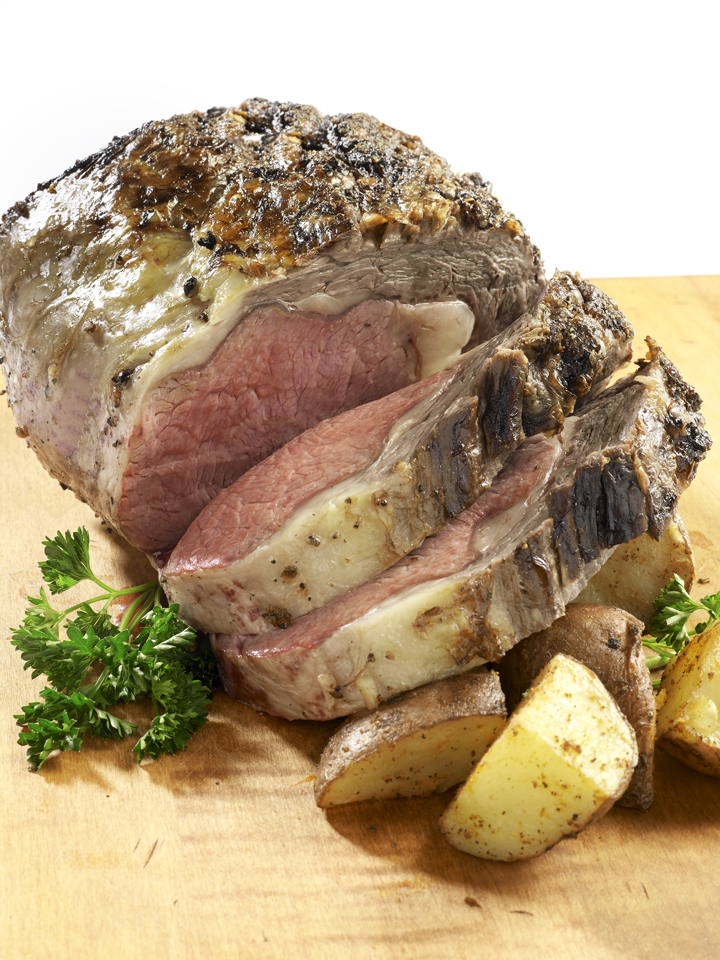 My favorite is a standing rib roast. There’s something so basic and logical about the rib bones being included in this particular cut. Everyone fights over them. Also not surprising is that the bones add more flavor and succulence to the beef. Bones will do that when roasting chicken, pork and lamb as well.

As you may guess, the standing rib roast is the centerpiece at many of my dinner parties. I don’t like to overdo it. Just a bit of salt and freshly ground pepper, as Phyllis recommends below. Also as Phyllis suggests, I refuse to overcook it. My Dad likes it extremely well done. So after slicing, I usually put his portion back in the oven for a bit more roasting. Most of my guests, however, are perfectly content with medium rare. Of course, I like to add some diced potatoes and aromatics such as onions and carrots around the beef. As they roast, they absorb the juices and become as heavenly as the roast itself.

By the way, I’m not the only one in my family who’s carrying a torch for the beef roast. My Mom loves it as well. Her choice (no pun intended) is the eye round. No bones about it, but still a juicy treat. When she’s planning on the eye round for dinner, she doesn’t tell us. Always a surprise. As we walk through the door, though, it becomes immediately apparent that beef is doing its thing in the oven. The whole house is perfumed with its aromas, a gentle sweetness floating in the air. She does something interesting with it. Mom takes quartered onions and actually attaches them on the roast with toothpicks, instead of around the pan. A bit of salt and pepper is all that’s needed to complete her recipe. Mashed potatoes, as well as peas sautéed with onions in olive oil, are always the accompaniments, along with a large salad. Really, can anyone ask for more? 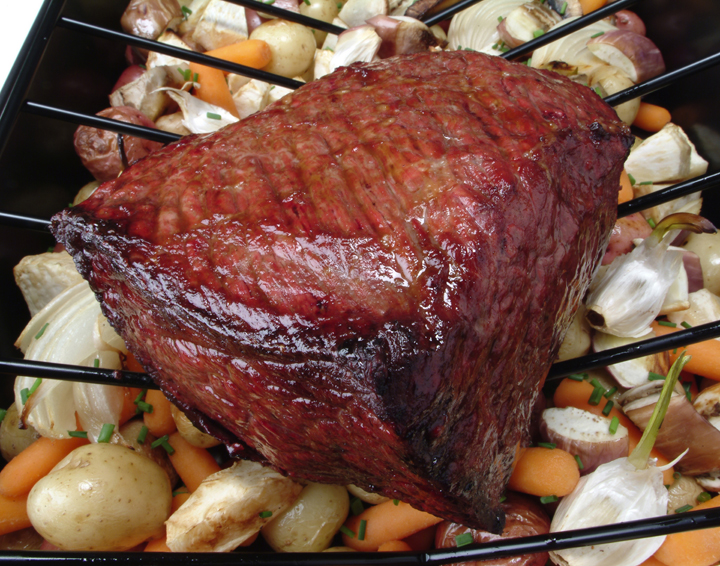 I should mention here that not every cut of beef is made for roasting. Sirloin tips, rumps and top rounds are all perfectly suited for the roasting pan, as long as they are prime or choice grades. Lesser grades and cuts are much better braised in a pot, on the stove top. Also great meals, but that’s a whole other blog post.

Before I go, I’d like to suggest that you make ample use of the brown bits and juices at the bottom of the pan after roasting beef. Be sure to skim off the clear fat first. Then whisk in a good red wine to deglaze the pan for a simple but satisfying drizzle. Or follow a traditional flour-based gravy using the beef drippings. You can include red wine here as well, along with mushrooms and thyme.

Beef satisfies. There’s no denying that. But when you take a goodly portion of it and roast it for a couple of hours, it becomes a meal of royal proportions and will touch the hearts of all that grace your dinner table. There’s so much love in it. 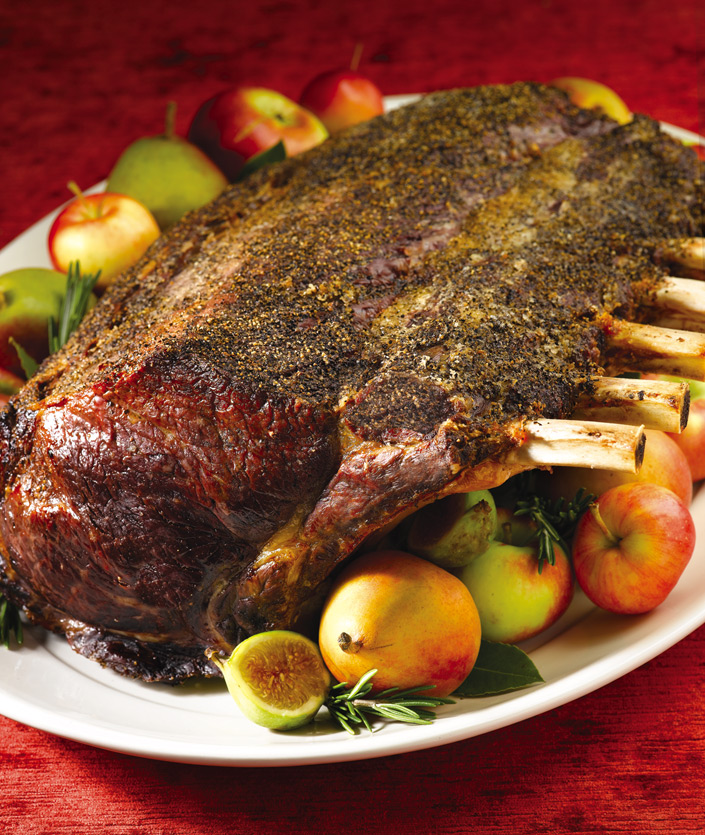 This is my favorite cut of beef–rich, luscious and comforting, and so simple to make. Let the flavor of the meat reign supreme by adding only salt and pepper as seasonings. Not a bad choice for a lovely November dinner. About the only thing you could do wrong is to overcook it. Be sure to have an accurate meat thermometer.

A three-rib roast will generously serve six people with leftovers which will be no problem. Roast beef sandwiches are delicious. Buy a top choice roast from the small loin end. Have the butcher remove the feather bone and the chine bone as this will make carving easier. Let the meat set out at room temperature for a few hours before roasting. Pat dry and salt and pepper the roast liberally.

Place on a rack in a roasting pan and set in a 500 degree oven for 25 minutes until the toast is well seared. Lower the temperature to 325 degrees until it is done to your taste. The cooking time for rare beef will be about 18 minutes per pound; for medium rare, about 22 minutes per pound. About an hour before meat is done arrange potatoes around roast. Let them cook and brown in the fat and drippings. Baste and turn them over after a half hour.

Remove from oven at 120 degrees if you like rare beef. It will continue cooking about 10 additional degrees. Cook to 130 for medium rare and 140 for medium. Let the meat stand for 15 to 30 minutes before carving to let the juices settle. You will need this time to prepare an au jus accompaniment and make Yorkshire pudding. Pour pan juices into a fat separator. Set the fat aside for Yorkshire pudding. . Place roasting over two burners on your stove. Deglaze with pan juices and add 1 1/2 cups of red wine, stirring and reducing by half. Strain and season to taste. Slice roast into 1-inch slices and serve with hot au jus and Yorkshire pudding.

The classic accompaniment for roast beef is crisp and puffy Yorkshire Pudding.

Preheat the oven to 450 degrees. Sift the flour and salt together onto a sheet of wax paper. In a bowl beat the eggs and milk until well combined and foamy. Gradually beat in the flour and salt just until combined. Pour the drippings into an 8-inch square baking dish or muffin tins or popover pans. If using tins or pans, pour only ½ full. Place in the oven and get it smoking hot. Carefully remove the pan and pour in the batter. Reduce the heat to 350 degrees. Return the dish to the oven and bake until puffed and dry about 20 to 25 minutes. Serve immediately.