Crab cakes are not fish cakes. Just needed to put that out there. Well, literally they are, I guess. However, the fish cakes I grew up with came directly out of the freezer. They were good enough, as I remember, especially when served with mashed potatoes. The fact is their consistency was kind of like the mashed potatoes they sat next to on the plate. No, crab cakes, when prepared properly, are loaded with chunks of luscious crabmeat. And that’s a crustacean of a different color, you can say.

In my culinary travels, I’ve encountered lots of crab cakes. The best, until Phyllis’ recipe below, were introduced to me in Baltimore. Maryland is noted for them. It’s a serious business there. I know why. Maryland is home to some of the meatiest, sweetest crabs on the East Coast. Best I ever tasted. Ask a hundred Marylanders how they prepare their crab cakes, and you’ll get a hundred different answers. This is personal stuff! But even there, I encountered good and then even better. It’s all in the quality of the crab, really. And although there might be a tendency to over mix and therefore slightly mash the crabmeat, Marylanders will tell you it’s imperative that the mixture be gently folded. In this way, the lumps of crab maintain their shape, bite and integrity.

I’ve had several goes with my own crab cake endeavors. I found that after several variations, using fresh lump meat crab works best for me. I also discovered that the minimum amount of breadcrumb or cracker meal is best – just enough to bind the mixture. You’re not after breadcrumb cakes, after all. It’s the same with the seasonings. Overdo it and you’ll lose the delicate sumptuousness of the crab. Not a good thing. Be gentle. A little seasoning goes a long way here.

I believe that a good – no, great – crab cake is one of the most satisfying meals on earth. Served with a tasty, homemade tarter sauce, there’s nothing like it. I’ve heard there’s a debate out there about frying vs. baking. Well, I’ve had both and I have to say that pan frying works best for me. A little tricky turning them over in the pan, though, if you’ve prepared your crab cake properly. That’s to say, they should be loosely formed. Press them together too much and you’ll lose the flaky texture that makes them a gourmet delight. You can finish off your pan fried crab cakes in the oven, as Phyllis suggests, to be sure that they’re heated thoroughly before serving. That being said, baking them from the start is nice, as well. You’ll end up with somewhat of a crabmeat stuffing experience. But hey, how bad could that be?

There are lots of ways to enjoy a crab cake. Just a squeeze of lemon is all that’s really needed. You may, however, want to take it to another level. One of my preferred accompaniments is creamed corn. No, not out of the can. I sizzle up some smoky bacon until crisp and crumbly. Then I prepare a béchamel sauce using the bacon drippings for the roux, sweating some chopped onion before adding the flour and eventually the milk. After the sauce has thickened, in goes the corn and crumbled bacon. Add a touch of salt and plenty of freshly ground pepper to taste. Spoon on the plate, and place your crab cakes directly on top. You’ll enjoy a nice textural contrast between the crispiness of the crust and the silkiness of the cream. Also, the sweetness of the corn and crab are balanced perfectly by the sauce and bacon. Can’t get enough of that one.

Crab cakes are on my A list, to be sure. One of those epicurean delicacies that make me so happy I could laugh out loud when they’re placed before me. As an appetizer, main course, or even on a bun, I always get excited. That’s the feeling I’m constantly looking for when I sit at the dinner table. I’m sure you feel the same way too. 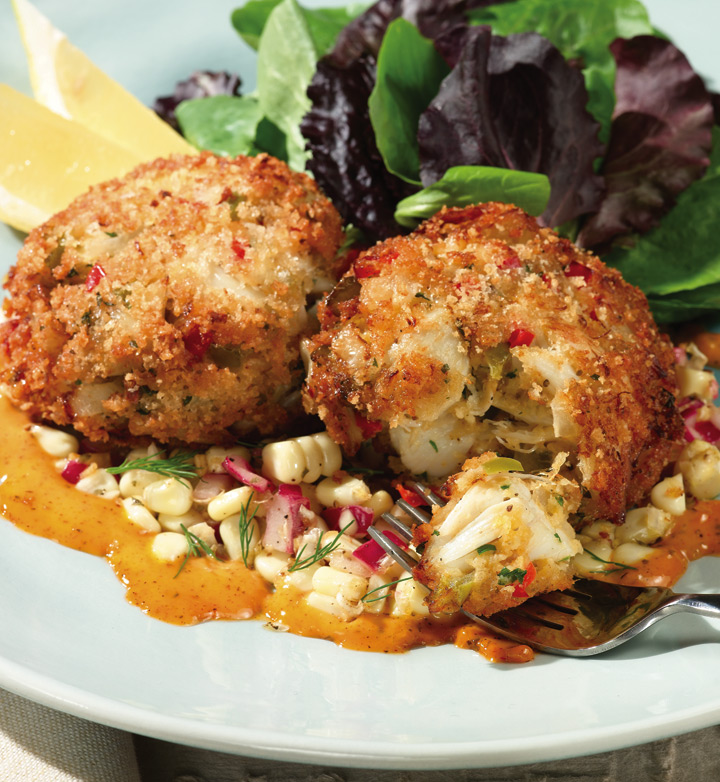 Recipe Reprinted from our April blog. Article is new.
It’s All About Crab . . . Crab Cakes

Available year round, luscious fresh crabmeat can be transfigured into sweet
delectable crab cakes. Make sure to let the flavor of the meat shine through
by buying the best grade of crab meat you can afford and judiciously adding
seasonings. The briny sweetness of the crab will be preserved and
accentuated.
Crabmeat comes in four grades according to the USDA: jumbo lump, backfin
lump, flake white and claw meat. The key is that whatever crabmeat you buy,
be generous with the meat and don’t overpower it with filling. Look for
plastic containers of fresh crabmeat at the fish market or at the fish
counter of the supermarket.
Ingredients: For 8 crab cakes, serving 4 people
¾ lb. picked jumbo lump or backfin lump crabmeat
3 T high quality mayonnaise
1 t Dijon mustard
1 T fresh breadcrumbs
2 heaping T flat leaf parsley, chopped
½ t garlic, minced
2 T scallion, minced
½ t kosher salt
¼ freshly ground black pepper
1 large egg, beaten
2 T peanut oil, more if needed
1 lemon cut in wedges for garnish
Procedure:
1. In a large bowl, place the crab meat and gently fold in the mayonnaise,
mustard, breadcrumbs, parsley, garlic, scallion, salt and pepper until they
are thoroughly incorporated. Fold the egg into the mixture.
2. Mold the crab mixture into 8 cakes and flatten slightly. Cover with
plastic wrap and let them rest in refrigerator for a half hour.
3. Preheat oven to 350 degrees. Heat a 12-inch cast iron skillet to medium
high and add oil. When it shimmers, transfer 4 of the crab cakes to the
skillet. Sauté gently on both sides until browned, about 2 minutes per
side.
4. Transfer to a plate lined with absorbent paper. Sauté the remaining 4
cakes similarly, adding more oil if needed. Place all the crab cakes on a
baking pan and bake for five minutes until heated through.
5. Garnish with lemon wedges and homemade tartar sauce. Do not diminish your
crab cakes with jarred tartar sauce.
Tartar Sauce
2 large shallots, finely chopped
2 medium gherkins or cornichons, finely diced
2 T freshly squeezed lemon juice
2 T parsley, finely chopped
1 cup mayonnaise
Salt and pepper to taste

Mix all ingredients and refrigerate until ready to use.
Adapted from the Lee Bros. Southern Cookbook